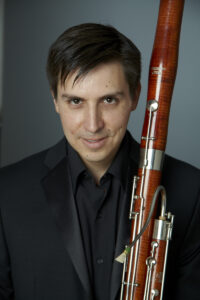 Damian Montano enjoys an active career as both bassoonist and composer. He is a member of the Los Angeles Chamber Orchestra, and has performed with numerous other southern California orchestras, including the LA Philharmonic and LA Opera. In the recording studio, he has worked with composers such as John Williams, Danny Elfman, Michael Giacchino, and Hans Zimmer; some of the scores that include his playing are Star Wars Episodes 7, 8 & 9, The Mandalorian, Rogue One, Coco, Moana, Alice in Wonderland, The BFG, Men in Black 3, Pirates of the Caribbean: On Stranger Tides, Empire, and Star Trek: Discovery.

As a composer, Damian has been funded by a grant from the National Endowment for the Arts, and has received commissions from ensembles across the country, including the Houston Symphony, LA Chamber Orchestra, and Dallas Winds. His works have additionally been performed by orchestras such as the National Symphony, Long Beach Symphony, and the Northwest Philharmonia.

While studying at the University of Southern California, Damian was featured as soloist with both USC’s Wind Symphony and the Young Musicians Foundation Debut Orchestra, subsequent to winning each ensemble’s concerto competition with a work that he composed. He appeared as a headlining artist at the International Double Reed Society Conference, where he played the dual role of soloist and composer in the world premiere of his bassoon concerto “Three Night Pieces.” Damian gave the west coast premiere of this concerto with Orchestra Santa Monica in 2017.

Damian lives in a 1914 Craftsman with three rescue dogs and loves hiking up to Lake Hollywood on the weekends. Visit him at: www.damianmontano.com.