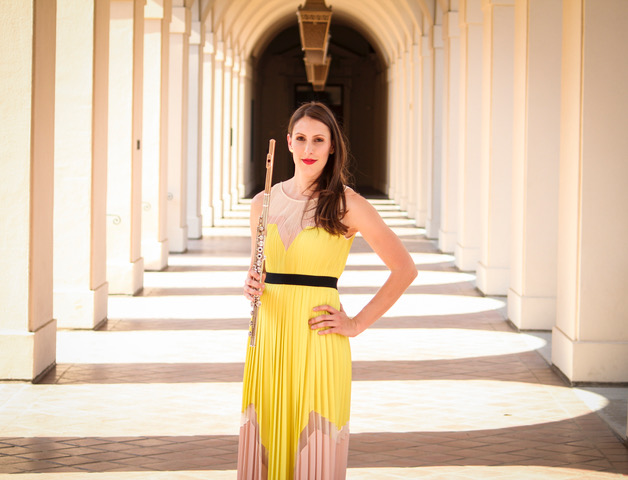 Catherine Baker, a Houston native, has most recently been named Principal Flute of the Bakersfield Symphony Orchestra and the Second Place Winner of the 2019 National Flute Association Orchestral Audition and Masterclass Competition. She has also been named First Place Winner and Murray Panitz Memorial Award Winner of the 2018 Flute Society of Greater Philadelphia Young Artist Competition and as a finalist and received honorable mention at the 2018 San Diego Flute Guild Young Artist Competition. Catherine is serving as the Principal Flute of Orchestra Santa Monica, and has served as principal flute of the American Youth Symphony, and the YMF Debut Orchestra, and additionally the Piccolo Chair of the Young Artists Symphony Orchestra of LA. Ms. Baker has also performed in orchestras throughout the country including the Bakersfield Symphony, the Brevard Music Center, the Hollywood Chamber Orchestra, the Hot Springs Music Festival, the Kaleidoscope Chamber Orchestra, Muse-ique, the New World Symphony, the Redlands Symphony, the San Bernardino Symphony, the South Dakota Symphony, the Southeast Symphony, the Tanglewood Music Center, and the Texas Music Festival. Through her performances, she has played under notable conductors including Gustavo Dudamel, Charles Dutoit, Keith Lockhart, Andris Nelsons, Carl St. Clair, and Michael Tilson Thomas. Catherine received the Special Recognition award in the YMF Debut Concerto Competition and performed as a soloist in October 2014.

Catherine studied flute with Jim Walker at the University of Southern California’s Thornton School of Music in 2013-2015, where she received the Woodwind Chamber Music award, and she also received her Master of Music degree at The University of Texas at Austin’s Sarah and Ernest Butler School of Music with Marianne Gedigian in 2013. While attending UT, Catherine received the Outstanding Master’s Degree Recital award for the 2012-2013 school year. Catherine received her Bachelor of Music degree from the University of Houston’s Moores School of Music with Jennifer Keeney and Sydney Carlson. At the University of Houston, she received vast ensemble experience which included touring with the Wind Ensemble to the Colorado Music Education Association Convention and the Texas Music Education Association Convention. In 2010, she played in the album by Naxos featuring the wind ensemble playing works by Nicolas Flagello and Arnold Rosner.

Catherine regularly teaches young aspiring flutists, passionately developing the students’ abilities to produce a strong sense of musicianship, beautiful sound, and fluent technique. Currently, she is a flute teaching artist at the LA Philharmonic’s Youth Orchestra of Los Angeles at Heart of Los Angeles (YOLA @ HOLA) and the Young Musicians Foundation. Catherine’s students have consistently been given honors in regional, statewide, and national competitions/auditions.

Outside of her musical endeavors, Catherine has fused her interest for graphic design with music by designing posters, invitations, and programs. She has worked with flutist and teacher, Dr. Timothy Hagen, by illustrating for his recent podcast “Rally” and publications by Owl Glass Music: The Scientific Method of Practicing, From Theory to Practice: An Analytical Performance Guide for Flutists and NarrEtudes.

She also enjoys baking pies, walking her poodle, and exercising on a regular basis! More information can be found at www.catherinebakerflute.com